At the end of October, Sir Erich Reich, Chair of the Kindertransport group in the Association of Jewish Refugees in the United Kingdom, visited the Leo Baeck Education Center in Haifa and gave an enlightening living history lesson to a group of 50 high school students and teachers.  Sir Reich related the personal story of his journey alone at the age of four from Vienna to England in 1939 on a Kindertransport, and later from England to Israel as a youth, and back to England following his military service in the Israel Defence Forces. 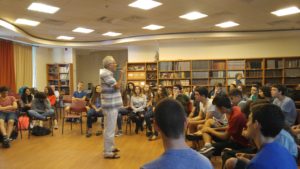 He related the difficulties he endured and overcame along the way, and his eventual success as an entrepreneur, and knighthood in 2010 for his charitable activities. He published his amazing autobiography in 2017 in a book entitled “The Boy in the Statue: From Wartime Vienna to Buckingham Palace.”  The audience was impressed by Sir Reich’s optimism and determination to succeed, despite the tremendous hardships and challenges he endured throughout his life. The meeting with Sir Reich was another event in the continuing Kindertransports school project, initiated by Dr. Ruth Ash, Head of Leo Baeck’s Library, and several English teachers, as part of the students’ contemporary Jewish history studies.

By Rabbi Ofek Meir This year, as an educator, I have a heightened sense of responsibility because we are living in times of crisis and difficulty. Our world fell apart in one fell swoop with the outbreak of the COVID-19 pandemic. In confronting this, crisis, I believe that education plays an … END_OF_DOCUMENT_TOKEN_TO_BE_REPLACED