In March thirteen Leo Baeck high school students traveled to London for an exciting and emotional study tour to mark the 60th anniversary of the death of Rabbi Dr. Leo Baeck, in whose honor our school is named, and to follow in the footsteps of the Kindertransport stories.

The idea of this journey was conceived by Leo Baeck high school student Aner Reiner and Dr. Ruth Ash, history teacher and head of our learning center, as a natural complement to a school project on the Kindertransports that began last year. After receiving the blessing of Dani Fesler, Managing Director of the Leo Baeck Education Center, the delegation departed, accompanied Dr. Ash and another teacher, Meital Cohen.

Last year the students undertook a project to translate from English to Hebrew stories written by the Kindertransport children that were published in a book entitled “I Came Alone” and also built a website where the stories are posted. In England they had several emotional meetings with some of the persons whose stories they translated and heard their inspiring testimonies firsthand. The journey became all the more meaningful by providing an opportunity to learn about Rabbi Dr. Leo Baeck who, before the outbreak of World War II, accompanied one of the Kindertransports by train to London and returned to Berlin, survived incarceration in the Theresienstadt concentration camp, and then decided to make his home and base in London.

In the headquarters of the Association of Jewish Refugees, the students met Rabbi Bernd Koschland and Sir Erich Reich, whose Kindertransport experiences enthralled and inspired the students, and who imparted the message to the youth that the future is in their hands for coming generations. The students were impressed by their optimism in spite of the hardships they endured. Sir Reich told the students that he does not remember his parents, a fact that surprised them. They were very touched by Rabbi Koschland’s story of the events of Kristallnacht and his discovery of his father, whom he had not seen for many years, in a photo from Dachau that he saw in a display during a visit to Yad Vashem.

The students visited the Liverpool Street Station where there is a statue of Kindertransport children, looking proud, poised and hopeful, by sculptor Frank Meisler, and another one inside the station created by artist Flor Kent.

At the Hoop Lane Cemetery near Alyth Gardens, where Rabbi Leo Baeck is buried, we held an emotional memorial service. The students were hosted for a Kabbalat Shabbat by the Alyth North Western Reform Synagogue where they met two congregants who arrived in England as refugees.

At Leo Baeck College, the students viewed a rare handwritten edition by Rabbi Leo Baeck and held books he donated to the college from his private library. In a fascinating meeting with Rabbi Jonathan Wittenberg at the Sternberg Center, the students heard about the current difficulty of coping with the issue of refugees in Britain and the involvement of the Jewish community.

The visit in the Wiener Library for the Study of the Holocaust and Genocide included a fascinating meeting with Ruth Schwiening who arrived alone in England in a Kindertransport at age 3. Ruth was very moved to meet Aner Reiner face to face, the student who translated her story in the “I Came Alone” translation project. The students also viewed rare items from the Wiener collection related to the Holocaust and Nazism.

During the stay in London daily sessions were held with the students in which they were able to process the events of the day through discussions and in writing. In addition to relating their connection to historical knowledge, the students were asked to express their insights and meaningful messages learned.

Below are selected student quotes following the various meetings and events of the visit: 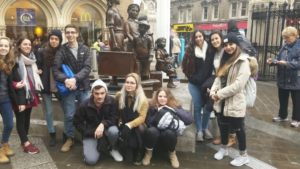