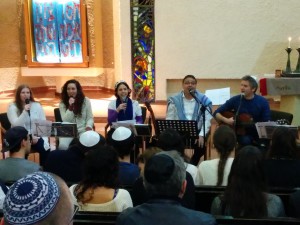 Rabbi Gabby Dagan and Rabbi Na’ama Dafni-Kellen led the musical service that filled the synagogue with the joyous singing and prayer of all the participants. Rabbi Na’ama inspired everyone with her sermon based on Parashat Ki-Tisa about “Machatzit ha-Shekel” (the Half Shekel), interpreted as meaning that one should always see himself as part of a bigger picture and in need of joining with others. In this spirit, she said, Israel and the Diaspora are two halves that complement each other.

The service concluded with mention of several honors and developments at the Leo Baeck Education Center: the staff of the Clore Shared Existence Center for receiving the Rotary International Tolerance Award for the Ein-Ha-Yam Trail project ; Yoav Yagol, Community Center Director, for participation and presentation of Leo Baeck’s Ein Ha-Yam Trail project at the Israeli President’s House; Eran Dubovi, YEDA CEO, for the planned expansion of the Leo Baeck YEDA school network to two additional schools in Israel’s low socio-economic communities, one Jewish and one Arab; and to Leo Baeck’s Young Ambassadors who participate in student exchange programs worldwide.

Rabbi Rick Jacobs remarked that this visit to Israel was filled with hope regarding the Reform Movement and its activities in Israel, but that he came with little hope about Jewish-Arab relations. Then he arrived at the Shabbat service in Ohel Avraham, sat next to an Arab-Israeli and heard about a shared path built together, and was refilled with hope that we can join together and walk that joint path and live a joint life. 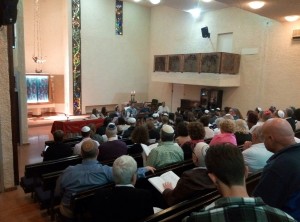