Ohel Avraham’s adult education programming takes text study to a new level. After a few successful years of running a beit midrash for adults, Rabbi Na’ama added an additional component to the adult education programming just this year: tiyulim (study tours)! Congregants get to learn about texts on-location at different sites of religious and historical significance throughout Israel.

So far, the program has had two successful trips, one to Tzipori and one to Caesarea.

When Tanya Ben-Haim made aliyah from the Former Yugoslavia, she was not connected to religion. Tanya started to learn in Rabbi Na’ama’s beit midrash class three years ago and has participated on both study tours. While Tanya had previously been to Tzipori, she said that her time on the study tour there helped her experience the place in a whole new way. The tour guide provided history of the area, and Rabbi Na’ama discussed the site’s significance to the Jewish people, incorporating Jewish texts. Much of the time was spent discussing Rabbi Yehudah Hanasi, who was the redactor the Mishna.

The second study trip, to Caesarea, included congregants of different ages, a rabbinic student from Leo Baeck College who’s currently learning with Rabbi Na’ama, and Ohel Avraham’s undergraduate intern from the International School at University of Haifa. The diversity of participants highlighted Ohel Avraham’s attention to making Judaism accessible for people of different backgrounds. In line with this goal, the study tour to Caesarea helped participants connect with Judaism by matching texts to various sites of importance at Caesarea, an ancient Roman stronghold. Caesarea during the time of the Roman empire was different than other parts of the Land of Israel at the time because Jews were in the minority. This historical dynamic, among other things, led to interesting conversations among trip participants. Study trips like these and the on-going Beit Midrash- Kehilah Lomedet (learning community) bring Jewish texts to life for congregants of Ohel Avraham. Join us for this upcoming year of learning and tour studies. 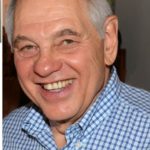 We express our sincerest condolences to the Samuels family on the loss of a great man. May his memory be a blessing. To read the obituary CLICK HERE To donate in Vic's memory CLICK HERE December 25, 1940 - June 14, 2020 … END_OF_DOCUMENT_TOKEN_TO_BE_REPLACED

In honor of Israel's 72nd Independence Day, The Leo Baeck Education Center High School representative ensemble produced and recorded during the time of the Corona virus isolation - while each one of us is at home - with love and longing for return to our beloved routine. Rabbi Ofek Meir, Headmaster … END_OF_DOCUMENT_TOKEN_TO_BE_REPLACED