He met with leaders of Jewish Federations, rabbis, and lay leaders of several schools and organizations 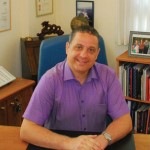 in Cleveland, New York City, Philadelphia, Houston, and Detroit to update them on projects and activities of the Leo Baeck Education Center. At Temple Emanu-El in New York City he addressed the congregation and spoke about the current situation in Israel, and in Houston he met with the newly appointed Israeli Consul General.

By Rabbi Ofek Meir This year, as an educator, I have a heightened sense of responsibility because we are living in times of crisis and difficulty. Our world fell apart in one fell swoop with the outbreak of the COVID-19 pandemic. In confronting this, crisis, I believe that education plays an … END_OF_DOCUMENT_TOKEN_TO_BE_REPLACED

by Rabbi Ofek Meir Rosh Hashanah 5781Dear Leo Baeck Education Center Family and Friends, The Hebrew word “shana” in Rosh Hashanah, has two meanings L’shanot (to change) or L’shanen (to repeat anew). This year, more than ever, we have been challenged with the dilemma of what to change as we … END_OF_DOCUMENT_TOKEN_TO_BE_REPLACED