Following several months of meetings between Jewish and Arab high school students, educators, and community center staff participating in the Arab-Jewish Youth Leadership Training Program, the students initiated, planned, and performed an exciting musical production for their parents and community members.  The show of original and well-known popular songs took place in the Tamra Community Center in June 2017, during the period of Shavuot and Ramadan holidays. The audience of 150 guests from Haifa and Tamra included the students’ parents, educators, the Mayor of Tamra, Dr. Suheil Diab, Leo Baeck’s Managing Director, Dan Fesler, regional directors of the Israeli Association of Community Centers, and Tamra school principals.

The project was a result of nearly a year of dialogue and planning in which the students raised ideas for joint community activities, initiated, organized, and carried out their ideas. 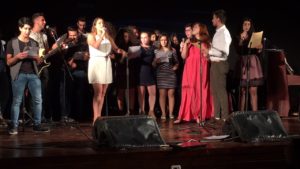 independently and within the framework of other local and regional institutions, national organizations, and governmental agencies. The program commenced in December of 2016, with the participation of 10 Jewish students from the Leo Baeck High School and 10 Arab students from schools in the city of Tamra north of Haifa.  The intent is to provide a platform for meetings, discussions, and training to enable participants to engage in dialogue and work together as a cohesive group on common goals. This is one of Leo Baeck’s many shared existance programs that foster tolerance and understanding.

Support for the program is provided by grants from USAid and the Anna P. Housen Fund for Israel of the Jewish Endowment Foundation, a division of the Jewish Federation of Western Massachusetts.

Below are excerpts from the address of Tarek Awad, the Director of the Tamra Community Center, to the audience before the perfomance in June:

About a year ago a group of Leo Baeck High School students visited us in the city of Tamra in order to learn about our community for a civics project. The Leo Baeck students met students from Tamra schools for a joint tour of the city. Mayor Suheil joined the group and accompanied them, and at the end of the day they all celebrated at the Tamra Community Center. The Arab and Jewish students conversed with each other as brothers who have known each other for a long time. The tour was very successful and we felt the need to increase and deepen the conncection between Leo Baeck and Tamra students. After the tour we were invited to a meeting at Leo Baeck where we were happy to learn that, thanks to support from a U.S. Embassy grant, there are funds to continue conducting meetings between Leo Baeck and Tamra youth. The tremendous challenge was met by both Leo Baeck and Tamra schools that agreed to open their doors for such meetings to take place. The community centers and school staff recruited profressionals and students from both cities and the exciting process began.  No one imagined that within a year Jewish and Arab families would meet and celebrate the Ramadan feast together… Our next goal  is to expand the process and include other age groups. We will not stop here. We must continue the mission in order to promote a real social change built on mutual respect, love and acceptance of the other. 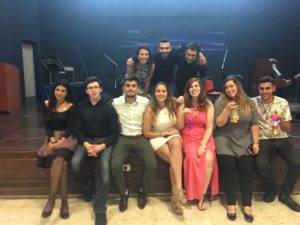